So gifted in his art that no one in our century could come near to him
(CORNELIS DE BIE, 1661)

His work is as a caress for the eye
(ARNOLD HOUBRAKEN, 1718)

He is the leader, the master of the Brabant landscape painters
(ALPHONSE-JULES WAUTERS, 1887)

Painter and draughtsman of great sensitivity and with a fine cool eye in front of nature, sometimes so surprisingly direct and fast that he seems to belong to the nineteenth century
(JACQUES FOUCART, 1987)

One of the most revolutionary painters of the seventeenth century
(JAN DE MAERE, 1994)

He does not simply reproduce nature as it is, but literally embraces it
(MICHEL KERVYN DE MEERENDRÉ, 1995)

This is how over centuries renowned art historians praised Lodewijk de Vadder, this enchanting and, for his time, revolutionary Brussels artist of the XVIIth century, altogether painter, draughtsman, engraver and tapestry designer.

The only elaborate study on him and his work, to which abundant reference is made in this site, is the outstanding masters’ thesis Lodewijk de Vadder (1605-1655) by Luc Geeroms, under the direction of Prof. Roger-Adolf D’Hulst, submitted in Dutch at the University of Ghent in 1985. This thesis, which was not published, is available for consultation at the library of the University of Gent (Universiteits Bibliotheek Gent, Sint-Hubertusstraat 8, 9000 Ghent, Belgium, BIB.GTH.027922).

The little we know about Lodewijk de Vadder’s life is summarised below and is based on recent research by historian Erik Wauters.

Lodewijk de Vadder was the youngest son of Gielis de Vadder and Margriet Cocx. His place and date of birth are unknown.

On April 8, 1605, he was baptized in the Church of Our Lady of the Chapel in Brussels. His godfather was Louis de Villart, his godmother Cateline de Vadder.

It is not known to which master Lodewijk was apprentice as, exceptionally, when he became master in May 1628, the register of the Brussels Guild of Saint Luke did not mention his apprenticeship supervisor. He may have been apprentice to his older brother Philips.

On November 24, 1626, he married Susanna Tack in the St. James'Church in Antwerp. For an unknown reason, the Archbishop of Brussels refused to marry the couple at the Cathedral of St. Michael and St. Gudula, although the banns of mariage had been announced there.  On February 12, 1627 the marriage was endorsed at the Church of Our Lady of the Chapel, indicating the parish where the couple may have settled.

On May 15, 1628, Lodewijk de Vadder became master of the Brussels Guild of Saint Luke.

On June 12, 1643, Jan Claessens became his apprentice (but did not become a master).

Little is known about Lodewijk de Vadder's activities as a tapestry cartoon designer. On February 27, 1644, he was granted tax privileges by the Brussels city authorities due to his activities as cartoon designer for the local tapestry industry. Further, records mention the names of several renowned Brussels tapestry weavers who reputedly used his cartoons.  Among these are Hendrik de Putter, Gerard van Strecken and Jan van Leefdael. For the weaving workshop of Boudewijn van Beveren he produced a pattern depicting the story of Diana and Pan (1645). Around 1650, he drew, possibly in collaboration with Jacob Jordaens, tapestry cartoons for the workshop of Jan Cordijs. However, as yet, no particular tapestry design could be attributed with certainty to him.

The precise date of de Vadder's death is unknown. On August 10, 1655, his funeral took place in Brussels in the Predikheren church.  No less than sixteen priests celebrated his funeral mass, indicating the wealth of the deceased. The Predikheren church was part of the Dominican convent that was demolished in 1796. It was located at the present Muntplein (Place de la Monnaie). At the time of his death, Lodewijk de Vadder was living near the Vismarkt (Marché aux poissons).

Strangely and contrarily to most of his contemporaries, he produced almost no religious works and only a few large paintings of him are known.

If his fame has faded by time, he was renowned and admired during his lifetime and in the following years, as emphasized by Cornelis De Bie in 1661 and as evidenced by the tax privileges he received from the Brussels city authorities.

As was not unusual at the time, Lodewijk de Vadder occasionally collaborated with other artists. So, he painted landscapes for a.o. Gaspard de Crayer, Antoon Sallaert or Michael Sweerts, and David Teniers painted the staffage of some of his paintings.

He might also have had an original collaboration with Wilhelm Schubert van Ehrenberg (1630-1676), as he possibly painted himself, in van Ehrenberg’s Kunstkamer met « Candalaudes en Gyges » (CB 715) one of his own paintings (in the upper right corner), as did in the same painting Gonzales Coques, Jacob Jordaens and others.

There is no known portrait of Lodewijk de Vadder. So far we know, he himself made no self-portrait except possibly one, sketched on the reverse side of a drawing kept at The Courtauld Institute of Art, Witt-Collection in London (inv. D.1952.RX.1003 – CB 582). It represents a mature man’s head with curly hair under a large floppy hat, a bent nose, a slightly projected upper lip, marked mouth corner and a voluntary chin on a sturdy neck, looking deep in thoughts. A self-portrait? 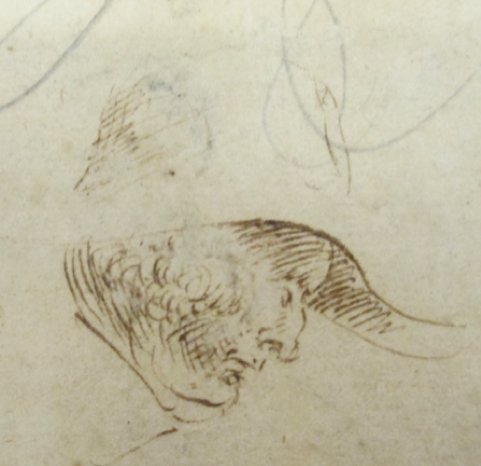 Images of the works are posted on this site for obvious information and identification, not esthetical or reproduction purposes. They were either made by us or found in the sources. Their quality is sometimes poor and some are truncated. Hopefully their quality will improve over time thanks to visitors’ possible contributions.

The following persons collaborated in a way or another to the preparation of this site and are herewith warmly thanked:

Are presented herein paintings, drawings, prints and tapestries, which:

Thus, works attributed to « Circle», « Follower», « Manner», etc. of Lodewijk de Vadder are in principle not presented herein, unless they could in our opinion be given or attributed to him.

Also not presented herein are works for which we found no or no publishable image (except a few that are catalogued as “signed” or “monogrammed”) or for which the information in our possession is for the time being insufficient to be published.

The HOME page presents all the documented works in the following order: paintings, drawings, prints and tapestries.

In each category, the works, which we believe are or could be by Lodewijk de Vadder, are presented first, the other works being presented subsequently.  None of the works being dated, a precise chronological presentation thereof is not possible. They are therefore presented in an order that, in our opinion, reflects the evolution of his art, or stylistic or thematic affinities.

Permanent Collections : by country, city, collection or inventory number.
Possessors (past or present, when known) : by possessor or country.
Art Dealers (when known):  by art dealer or country
Public Auctions :  by date, city, country, auction house or lot number
Exhibitions : by year, country, city, institution, exhibition’s title or number in the exhibition
Bibliography : by author, title or year of publication

Under CONCORDANCE  is a correspondence table between Thiéry & Kervyn de Meerendré’s, Geeroms’, and our list of Lodewijk de Vadder’s works.

The FILTERS appearing on both the left and the right sides of the images on the Home page allow multiple exploration ways through Lodewijk de Vadder’s works.

The works’ individual cards contain self explanatory information and some that may need an explanation such as :

Image : can be magnified by a click ; their quality is sometimes poor and some are truncated.

CB number : corresponds only to the encoding number and have no other meaning; by clicking on this CB number the work appears in its given position in the works’ general presentation.

Title : title chosen by us being either (i) an original title, or (ii) an English translation of a title in another language or (iii) a title given by us.

State : for prints, when there is more than one state.

Other title(s) : various titles found for the work, in their original language.

Dimensions : height and width are indicated in centimetres (cm) and rounded up or down to the closest cm or half cm unit (ex. 10 or 10,5); thus, the indicated dimensions are approximations and may slightly differ from those of other sources.

Thiéry & Kervyn : is mentioned when the work is one of the works, which Yvonne Thiéry and Michel Kervyn de Meerendré (198, p. 233) inventory as de Vadder’s works.

Geeroms : is mentioned when the work is one of the illustrated works which Luc Geeroms listed in his 1985 thesis, on the attribution of which he judged as follows :
G       Geauthentificieerd (authenticated)
T       Toegeschreven (attributed)
Tw    Tweifelgevallen (dubious)
N       Niet controleerbaar (non verifiable)
A       Afschrijvingen (rejected)

Public auctions : for technical reason, when an auction extends over more than one day, only the first day thereof is mentioned.

The visit and use of this site are subject to the following Terms of Use:

1. This site being made by non-professionals and the work of Lodewijk de Vadder being largely undiscovered, the information contained in this site is inevitably incomplete and may contain errors or inaccuracies.

2. This site claims no scientific or academic authority, especially on the question of attribution of the works.

3. All or part of this site, including the present Terms of Use, may be amended or removed at any time without prior notice.

4. This site as a whole and the organisation of its content (which are the original product of our activity) but not the information included therein (which is in public domain or not copyrighted) may not be used without our prior consent.

5. There will be no liability for :
(i) incompleteness, errors or inaccuracies
(ii) attributions given or not
(iiI) amendments to or removing of content
(iv) unavailablity of the site

6. Should you send us any message, being it information or questions, we shall endeavour but shall not have the obligation to answer you, nor to modify this site accordingly.

7.  This site uses cookies necessary for its good working and for analytical purpose of the visits thereto but no personal information is collected and no information collected from the cookies is communicated to third parties. See here our Cookies Policy.

8. Should any dispute arise, the law applicable will be exclusively Belgian law and the courts of Brussels  (Belgium) will be sole competent.

Messages can be sent to the email address @email